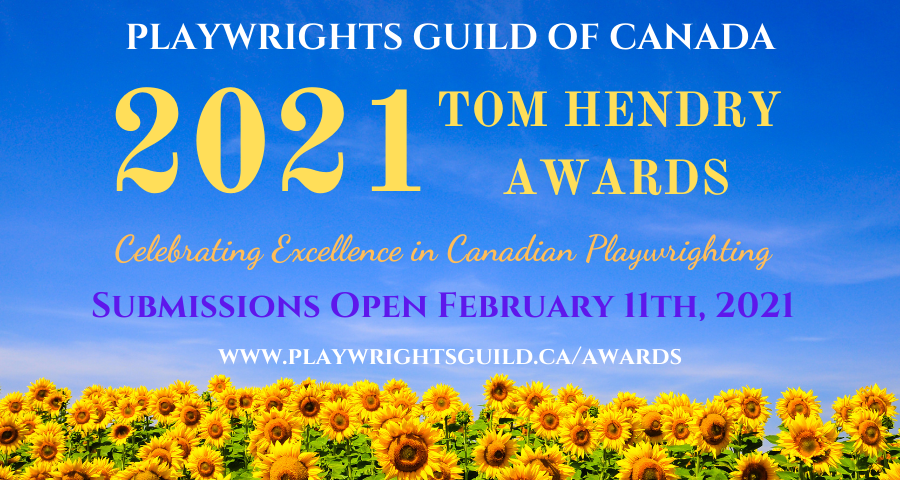 Submission will be open February 11th – May 5th for the 2021 Tom Hendry Awards!

Each year we host an annual awards competition honouring Canadian playwrights in a wide range of categories, including the RBC Emerging Playwright Award, Carol Bolt Award, TYA Award, Comedy and Musical Awards, Lifetime and Honorary Membership Awards, and the Bra D’Or Award. The awards are named after Tom Hendry, a founding member of PGC who passed away in 2012. The awards offer generous cash prizes and winners are recognized in a ceremony that takes place in the fall each year.

The Carol Bolt Award for Playwrights is given annually to a member of PGC who has premiered an original play between May 1st, 2020 – May 1st, 2021.

A juried panel selects the winner from a number of submitted plays. The winner of the Carol Bolt Award for Playwrights receives $5,000 and the option to be published. A shortlist of the best three entries will be announced in September 2021. The winner will be announced during the Tom Hendry Awards in October 2021.

The RBC Emerging Playwright award gives up-and-coming playwrights the opportunity to win a six-month mentorship with a professional playwright of their choice, from our 800+ playwrights roster as well as a $2,000 cash prize. PGC offers a second and third place prize as well! Readings of the shortlisted plays will be presented in the fall of 2021. Submissions are open for any supporting or student member of Playwrights Guild of Canada who has never had a professional production and have never been a full member of PGC. Submitted work must be a full length play.

Funding for the award has been generously sponsored by the RBC Emerging Artists Fund.

This award is given annually for a new comedy by a PGC member, which has not yet had a premiere production as of May 1st, 2021. This award is worth $5,000.

Funding for this award has been generously sponsored by the Playwrights Guild.

This award is given annually for a new musical work by a PGC member, which has not yet had a premiere production as of May 1st, 2021. This award includes a $5,000 prize as well as participation in Queen’s University’s Watershed Festival in May 2022.

Funding for this award has been generously provided by our sponsor, The Dan School of Drama & Music, at Queen’s University.

Funded and presented by the Arts and Letters Club of Toronto Foundation, the Robert Beardsley Award for Young Playwrights is granted to a full-time secondary or post-secondary student within the GTA for the creation of a one-act play script.

The entrant to the competition must be a playwright under the age of 30 at time of submission, and residing within the Greater Toronto Area. The winner is awarded a monetary prize of $500.

Applicants for this award do not need to be PGC members. If you are applying for this award and not a member, you will receive a PGC Student Membership once your submission has been received.

The Sharon Enkin Plays for Young People Award is given annually to a member of PGC who has a new or recently premiered theatre for young audiences (TYA) play. If premiered, production dates must be between May 1st, 2020 and May 1st, 2021.

Funding for the award has been generously sponsored by the Enkin Family.

To be honoured as a Lifetime Member, a playwright must be nominated by members, brought before the National Forum, and approved by the PGC Board. Criteria include recognition for a body of work, and/or service to Playwrights Guild of Canada and the theatre community. Membership dues are waived.

All current members of Playwrights Guild of Canada are welcome to forward nominations for Lifetime Membership.

All recipients of the Lifetime Membership Award and the Honorary Award have a place in the Playwright Circle.

This award is accepting nominations in 2021.

Presented by PGC’s Women’s Caucus, the Bra d’Or Award recognizes an individual for his/her/their efforts in supporting and promoting the work of Canadian women playwrights.

The Bra d’Or Award will be open for nominations, February 2021.

The winner will be announced during the Tom Hendry Awards in October 2021.

Honorary membership is awarded to an individual or organization for their contribution to the Canadian playwright community, and must be nominated by PGC members and approved by the National Forum. An honorary member need not be a playwright.

This award is open for nominations February 2021.

This award is now closed.