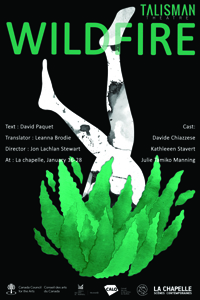 Presented by Talisman Theatre as part of the Wildside Festival in partnership with the Centaur Theatre and La Chapelle Scènes Contemporaines.

Wildfire is the English version directed by Jon Lachlan Stewart based on the original direction of Philippe Cyr.

Opening with a curse from a strange baby, featuring a cast of socially offbeat characters, a caged child, a murderous pet tarantula and a dead cat, Wildfire is a tragicomedy as fiercely dark as any from classical Greece. Structured as a multi-generational triptych, it tells the story of six characters trying to escape a toxic family heritage. In this magnificently constructed spiral of fatality, Paquet attacks our failing collective consciousness and the ensuing general apathy.

The play Le brasier is the recipient of the BMO Award as well as the Sony Labou Tansi International Francophone Theatre Award. It was also nominated for the prestigious Prix Michel-Tremblay. It was first produced by the Centre du Théâtre d’Aujourd’hui and L’Homme allumette, directed by Philippe Cyr. It was later recalled by popular demand, remounted at Usine C, and produced in Mexico and Switzerland.