“SHE SAID/HE SAID” by Anne-Marie Woods aka Amani 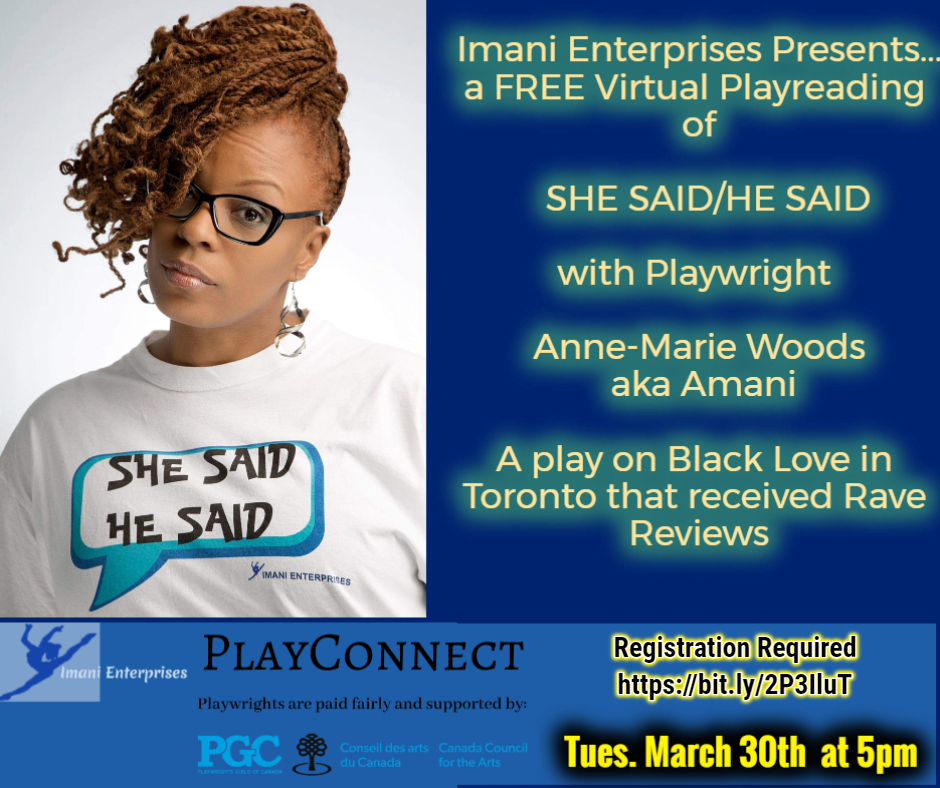 Imani Enterprises Presents.. .” SHE SAID/HE SAID” a play READING with Q & A sponsored by PGC, Play Connect and Canada Council for the Arts

Join us on Tuesday March 30, 5pm (EST), Virtual Time for a thought provoking evening with playwright Anne-Marie Woods aka as she reads an excerpt from her play on Black Love in Toronto SHE SAID/HE SAID

She Said/He Said is a play where spoken word, theatre, conflict and comedy join hands for a tragi-comic and complex look at relationships. The female/male rapport is laid bare in this battle of written by the multi-talented Woods

Through compelling monologues, dialogue, poetry and song, She Said/He Said takes a fresh and nuanced look at a relationship between two people searching for love, despite their troubling past experiences. A fusion of personal experiences and fiction, Woods conveys the vulnerability felt in romantic relationships and the importance of communication in this funny, tender and complex look at love in fast-paced, multi-cultural Toronto.

SHE has lived in Toronto for five years having grown up in Nova Scotia and navigates online sites and meet-up groups hoping to find someone. HE is of Jamaican heritage and ready for love after a long-term relationship and custody battle for his daughter. Together they fight to make their relationship last in a world where the “rules” are always changing.

After running singles events for years called “Blingles” (Black Singles) in Toronto, Woods realized people were having difficulty even acknowledging each other with a simple “Hello,” something foreign to a Nova Scotia gal. Woods recognized a social barrier needed to come down – it was time to take her thoughts from the page to the stage: She Said/He Said is the result.

She Said/He Said speaks to the conversations that Black men and women are having but not necessarily with each other. The dialogue focuses on SHE and HE over the course of their relationship, and then deftly shifts to include reflective and introspective monologues, songs and poetry that address a wider perspective. The couple struggles to unearth their authentic selves while working through the pain of past failed relationships and the racial stereotypes that they encounter in everyday society.

She Said/He Said had its world premiere at the MAI (Montréal, arts interculturels) produced by Black Theatre Workshop in the spring 2016, directed by Artistic Director Quincy Armorer, where it was a huge success. Imani Enterprises then presented the play at the Stages Theatre Festival at the Dunn Theatre in Halifax at the beginning of the summer where it was also warmly received. And finally she produced, directed and starte in the Toronto Debut in the fall of 2016. She is so excited to read this play and share these words again especially with the Black man being a central figure in the news for the past few years.

“Woods deserves credit for the composition and elegance with which she seamlessly integrates these moments into the regular dialogue and fabric of the show.” – Marilla Steuter-Martin, BroadwayWorld.com

“I particularly enjoyed his fantasizing himself as the black John Travolta from Saturday Night Fever with his moves and attitude.” – Byron Toben, Westmount Mag.ca

Anne-Marie Woods aka Amani is an award winning multi-disciplinary artist. An arts educator, producer, playwright, poet, director and creative consultant. With roots in London, England, Trinidad and spending her formative years in Nova Scotia… her life and career has always challenged boundaries and blended multiple genres or styles. In 2001, she was the first African Canadian to have a featured play ‘Waiting to Explode’ at the National Black Theatre Festival in North Carolina. Voted as one of 100 Black Women in Canada to Watch and the 2013 winner of a BBPA Harry Jerome Award for Excellence in Entertainment, she has performed and presented in the UK, Trinidad, and the World-Famous Nuyorican Café in New York City. In 2016, her Theatrical Rhapsody on Black Love, ‘She Said/He Said’ was the first one of her plays to have a World Premiere produced by Black Theatre Workshop in Montreal. They also produced the World Premiere of her youth production, Scotian Journey in 2019. Her other youth production, ‘The Three Friends’, that focuses on African Canadian History and race relations was a commisioned piece for the City of Barrie Black History Month Celebrations in 2017. It was then launched as a co production by Imani Enterprises and the Richmond Hill Centre for the Performing Arts in 2017 and 2019. Her latest script in development ‘Why Black Women Whisper’, her poetic and musical homage to the late Ntozake Shange, was a part of Piece of Mine Arts Festival in February, 2020. This play has also been selected for a staged reading in the 12th Annual Women Playwrights International Conference in Montreal, QC, in June 2022.