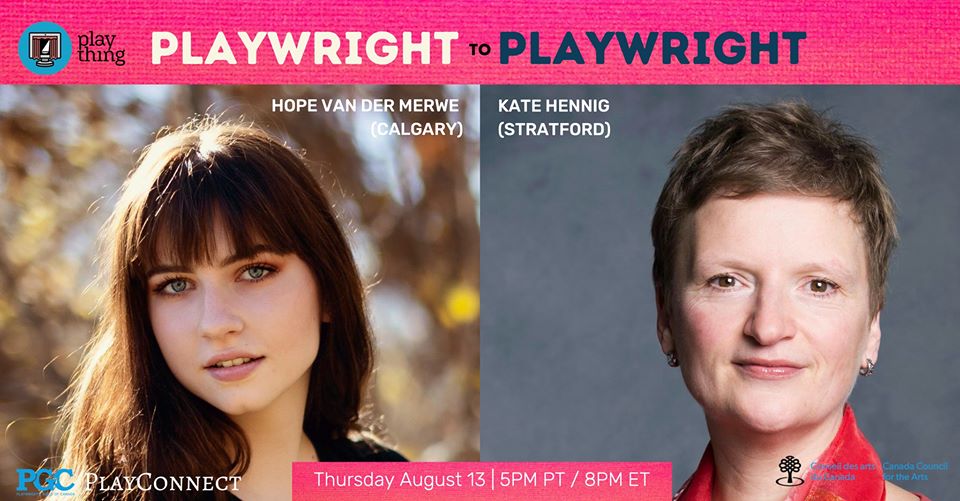 The 2nd pairing of our new interview series that connects emerging writers to established playwrights that have influenced their work!
Hope Van Der Merwe interviews Kate Hennig. Join us as they share their passion for creating authentic female voices and telling her-stories.
They will also be reading snippets from their plays with an audience Q&A at the end.
“When I saw Mother’s Daughter, what struck me the most about Kate’s writing was this idea of telling ‘herstory.’ It exposed the heteropatriarchal narrative of ‘his story’ while simultaneously humanizing a woman who has been demonized – the subversiveness of the re-writing of this history was something that really impacted me.” – Hope
__________________________________________
KATE HENNIG:
is a Canadian actor, playwright, teacher and director. Her plays include: (The Last Wife, The Virgin Trial, and Mother’s Daughter). She won the Carol Bolt Award for Best New Play, and was short-listed for the Governor General’s Literary Award for Drama. Kate has adapted (Cyrano de Bergerac) and Oscar Wilde’s stories for children, (Wilde Tales).
HOPE VAN DER MERWE:
is a student in York University’s BFA Acting Conservatory and the playwright/director of (Something Wicked) York University’s 2020 playGround Festival. Also an actor, she most recently appeared in Luca Winer’s (TwentySomethings, in Something Wicked), and in v-day @ York’s production of Eve Ensler’s (Vagina Monologues).
__________________________________________
A Canadian Play Thing event supported
by PGC PlayConnect and the Canada Council for the Arts.
PC: David Cooper (Kate) Leya Russell (Hope)
(TO JOIN, head over to our Facebook page. When we go live you should get a pop-up.)