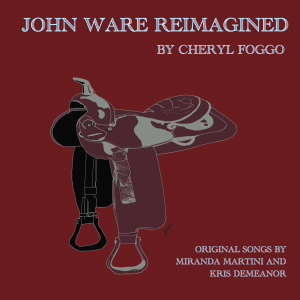 Joni loved everything about cowgirl life. From her checkered shirt, to her fringe vest, to the whistle on her hat, to Dale Evans on the Roy Rogers Show. But growing up as a young Black girl in 1960s Calgary, Joni struggled to see herself represented in the cowboy culture she adored: that is, until she found her under-sung hero: John Ware.

By some accounts John Ware was one of the greatest ranchers to ever ride in the West, known for daring acts of horsemanship, heroism in the face of danger, and a deep commitment to community. There’s even a mountain and a ridge named after him. But while the legend of John Ware may have been largely obscured for over a hundred years, today Joni is telling his story anew. It’s time to sit back in your saddle and let a new perspective take the reins.

A hugely entertaining personal journey filled with original folk songs, John Ware Reimagined, drives home the point that diversity has always been a part of Alberta’s story and seeks to restore the missing stories of Black Canadians to Alberta’s pioneering prairie culture.