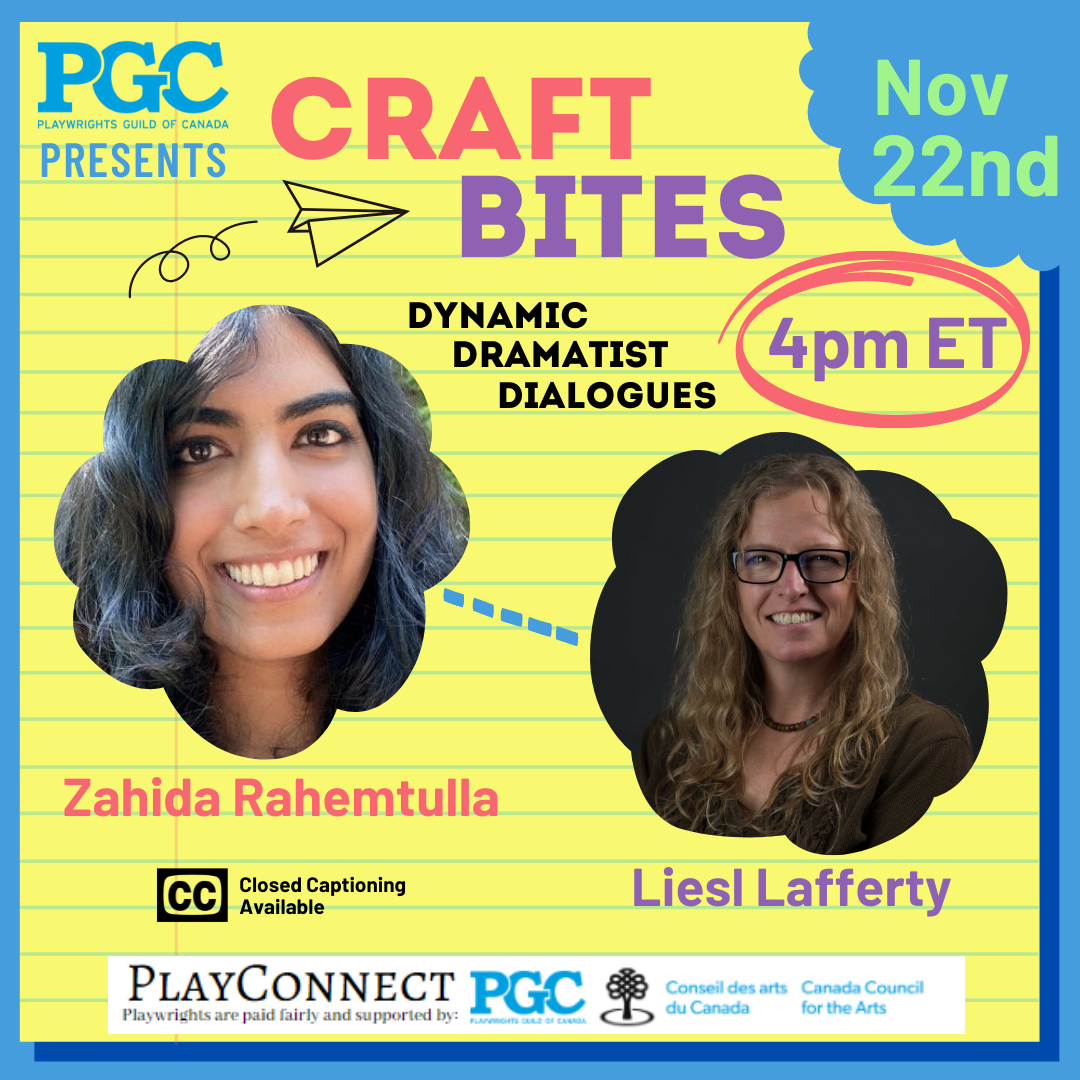 Zahida Rahemtulla
Zahida Rahemtulla is a playwright and fiction writer currently based between Vancouver and Toronto. She has been a resident at the Banff Centre in Alberta and Millay Colony for the Arts in New York. Her first plays, “The Wrong Bashir” and “The Frontliners”,  have been shortlisted for the Playwrights Guild of Canada Surefire Lists, the Ellen Ross Stuart Playwriting Award (Tarragon Theatre & Ontario Arts Foundation), and placed second for the national 2021 Voaden Literary Prize. She also writes short fiction and is at work on a humour novel for kids. She is studying Adult Education in Toronto and has worked for several years in Vancouver’s immigrant and refugee nonprofit sector in the areas of housing, employment, and literacy.

Liesl Lafferty
In May 2019, Liesl graduated from the University of British Columbia with a Master of Fine Arts in Creative Writing and Theatre. She is a Facilitator for script writing groups with Wet Ink Collective – empowering women writers, Realwheels – creating opportunities for people with disabilities, and Western Gold – celebrating the talents of senior professional artists. She is a scriptwriter, story editor, dramaturg, facilitator, and Jessie award-winning director, focusing on creating, harvesting, and developing new works. Her career highlights include directing and co-writing “A Town Called Hockey” at the Arts Club Theatre, winning the Jessie Richardson – Larry Lillo Award for Outstanding Direction of a Play for “House” by Daniel MacIvor, and receiving Jessie nominations for directing and producing “Drinking with Persephone” by Jenn Griffin and co-writing “bloodline” with Rita Bozi, Dmitry Chepovetsky, and Kate Hale. During the pandemic, Liesl had online public readings of “A Splendid, Savage Place” by Canadian Play Thing and Brave New Play Rites Festival 2020, and two readings of her short piece “The Gravedigger’s Daughter” at PGC World Theatre Day Play Reading Relay and the Firecracker Dept. At the last Craft Bites, she read from her play “The Republic of Inclusion” and then she went on to perform the solo show, live and in-person with Alley Theatre at Judith Fair, as part of the Vancouver Fringe Festival 2020!