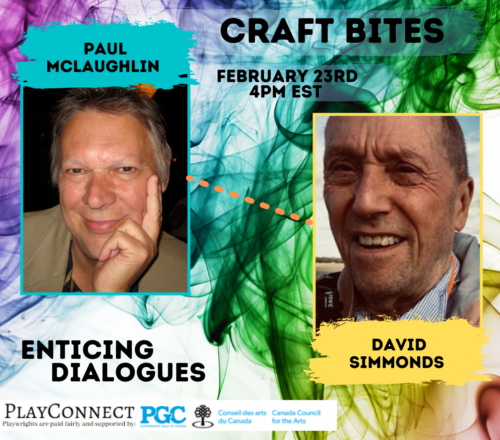 Tuesday, February 23rd
4pm EST
Join this enticing dialogue between playwrights Paul McLaughlin & David Simmonds as they share bite-size excerpts from their own work and engage in conversation about writing comedy. Register for this FREE event HERE.

PAUL MCLAUGHLIN
Paul has been a professional writer, broadcaster and university teacher for more than four decades. A multiple award-winning playwright, his plays have been produced by Lunchbox Theatre, Solar Stage and CBC Radio Drama. In addition to plays, he has written numerous books, magazine articles and radio scripts. He is  currently an adjunct professor in York University’s Professional Writing program.

DAVID SIMMONDS
David has worked in theatre, film, and music as an actor, director, and writer.  Through the mid-seventies he trained and was a contract performer with the Actor’s Workshop in Vancouver. Established, owned and operated the Screen Actor’s Studio in Victoria B.C. 1985 – 2015. Ongoing, is a founding member of both CineVic, the Society for Independent Filmmakers and the Victoria Film Festival. As a writer, interested in developing stories for film/ video, theatre and musical projects. Published, The Teleporter’s Handbook (2018, a book of modern fables and tall tales. His latest book, Picasso On A Napkin is a collection of lyric poems, songs, raps and chants,  Currently (2021) looking to convert his comedy Dinner with Nigel into a radio play.