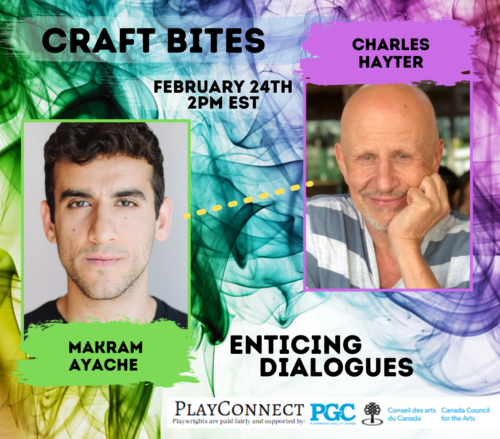 Wednesday, February 24th
2pm EST
Join this enticing dialogue between playwrights Makram Ayache & Charles Hayter as they share bite-size excerpts from their own work and engage in conversation about writing drama. Register for this FREE event HERE.

MAKRAM AYACHE
Makram Ayache is a Lebanese-Canadian community-engaged playwright, director, actor, producer and educator who splits his time between Edmonton and Toronto. His playwriting explores meaningful representations of queer Arab voices. He endeavors to bridge complex and interlocking political struggles to the very intimate and real experiences of the people impacted by them. Ayache has been nominated for four Elizabeth Sterling Haynes Awards for his plays Harun (2018) and The Green Line (2019). Most recently, Harun won the Playwrights’ Guild of Canada’s annual Tom Hendry Award in the RBC Emerging Playwright Category. In 2020, Ayache completed Factory Theatre’s Mechanicals Actors’ Enhancement Training in Toronto and co-created and performed in Azimuth Theatre’s All That Binds Us in Edmonton. Currently, his play The Hooves Belonged to the Deer is commissioned by the Alberta Queer Calendar Project which has been recorded for online public viewing, directed by Peter Hinton, to be released in early 2021. Also 2021, he will spend his time at the Citadel Theatre developing his skills as a director and he is a participant of Generator’s Artist Producer Training program. He is also thrilled to be a part of Musical Stage Co. and Prime Mover’s NoteWorthy program where he will explore musical theatre creation. Explore his work at www.makramayache.com

CHARLES HAYTER
Charles Hayter (he/his) is a queer writer of Anglo-Indian descent based in Toronto. He studied drama at Queen’s and Calgary before entering medical school. His playwriting mentors are Judith Thompson, Carol Bolt and Brad Fraser. Writing credits include Lady-in-Waiting (Best Writing: Solo Show, Fresh Fruit Festival, NYC, 2008), Eldorado Town (4th Line, 2010) and Radical (New Ideas Festival, 2014; FireWorks Festival 2015, Alumnae Theatre). He participated in the developmental workshops of Buddies’ Youth/Elder Project in 2016. Also at Buddies, Charles collaborated with Brian Cope (a.k.a. Miss Juwanna Dewitt) on Motherload, the sleeper hit of the 2018 Rhubarb Festival. Charles is a recent graduate of Tracey Erin Smith’s Soulo theatre workshop and is working on a new one-person show Whitewash based on the discoveries made there. He is writing a new play about young Harry Houdini and the invention of the straitjacket escape, and is under contract with University of Toronto Press for a book of stories about cancer patients. https://charleshayter.com