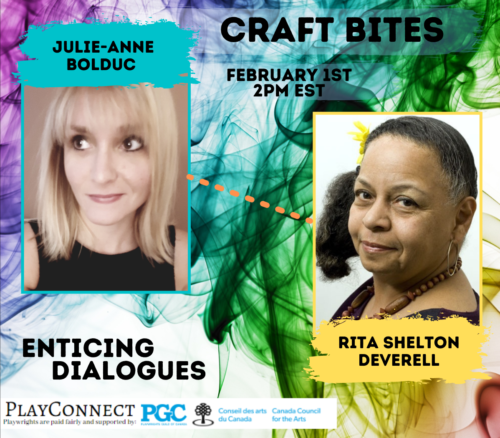 Monday, February 1st
2pm EST
Join this enticing dialogue between playwrights Julie-Anne Bolduc & Rita Shelton Deverell as they share bite-size excerpts from their own work and engage in conversation about writing drama. Register for this FREE event HERE.

JULIE-ANNE BOLDUC
Julie-Anne is bilingual, from Northern Ontario. She is a blogger for Allergy Canada. She went to University at Wilfrid Laurier in Waterloo and travelled teaching English in Asia for two years. She is a certified Teacher in Ontario from the University of Ottawa, both French and English, from pre-kindergarten to grade twelve. She had a short story published with Latitude 46 in their anthology, 150 Years Up North, called On Being Franco-Ontarian.  She is currently doing her master’s at the University of Calgary for Playwriting. She has had paintings commissioned by Laurentian University and participated in the Northern Lights Festival in Sudbury. She has been in exhibits at Science North Museum, the Gallery of Northern Ontario, NISA, and Kuppopajo. She was a runner up for the lyrics section for the contest “songoftheyear.” She was part of the Sudbury Playwright Junction of 2015-16. She received a grant from the Sudbury Theatre Centre for this play in 2017. Furthermore, she had a play called I’m addicted to Breathing, read at the University of Calgary, with artistic director Shari Wattling from Lunchbox Theatre in Calgary in September 2020. Her MFA Thesis play, Adeline, will be staged in February 2021 with Artistic Director Bronwyn Steinberg from Lunchbox Theatre in Calgary. She hopes to make a difference through her art and writing.

RITA SHELTON DEVERELL
Dr. Rita Shelton Deverell was the twelfth holder of the Nancy’s Chair in Women’s Studies at Mount Saint Vincent University from 2009 to 2012. She holds a BA in philosophy (Adelphi), an MA in the history of religions (Columbia), and an EdD (OISE/University of Toronto). Deverell is a theatre artist, an independent television producer/director, a co-founder of Vision TV, and the first woman to lead a journalism program in Canada as acting director of the University of Regina’s School of Journalism. In 2005, she concluded her term as news director at APTN, where she mentored her Indigenous successor. Deverell was also the CanWest Global Fellow at the University of Western Ontario and the Storyteller-in-Residence at Centennial College’s Centre for Creative Communication. In 2010, her play McCarthy and the Old Woman had a first production by the School of Drama, University of Washington. Deverell has been the author or editor of, or a major contributor to, seven books and the producer/director/writer of eight independent TV drama titles. In 2016, her multimedia e-learning kit Women, Contemporary Aboriginal Issues, and Resistance was acquired by the National Film Board’s CAMPUS portal. Her many honours include two Geminis, the Order of Canada, and 2018 ACTRA Woman of the Year. Her book American Refugees: Turning to Canada for Freedom is published by University of Regina Press. Deverell’s 2019 play Who You Callin Black Eh? won the Toronto Fringe Festival’s Teen Jury Award. She is a Trustee of the Royal Ontario Museum and a Director of CBC/SRC.