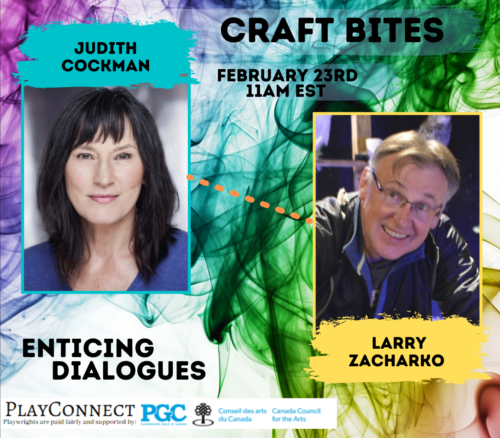 Tuesday, February 23rd
11am EST
Join this enticing dialogue between playwrights Judith Cockman & Larry Zacharko as they share bite-size excerpts from their own work and engage in conversation about writing two-handers. Register for this FREE event HERE.

JUDITH COCKMAN
Judith Cockman is a writer, actor, theatre director and producer. She’s performed in Stratford,  Montreal, Toronto and Los Angeles. She co-founded and directed The Roadside Stage in her youth, a theatre and acting school in  the historic Town Hall near Kleinburg; and founded and produced The Roaring Truth Theatre in Toronto’s inner city of Regent Park for youth 15 – 25 in the mid 2000’s, mentoring in all aspects of theatre production. She wrote two productions with the company: My Loss is Our Loss, performed to a full house at the Gladstone Hotel; and Collapse, which received a staged reading at the rock paper sistahz festival. In Los Angeles in the late ‘90’s she was accepted as a writer, performer and director into both the Playwrights’ Kitchen Ensemble and Theatre West. She’s written, produced and performed four Toronto Fringe Festival works-in-progress – all of which generated heated discussion. She tackles the subject of power in her plays. The abdication of it. The abuse of it. The reclamation of it. Her feature articles have been published in Canada and the U.S, including The Star, The Sun, Playback, Kidscreen, Animation World Magazine and AV Video Multimedia. Her television credits include the National Prime Time television comedy series Out There, and research & writing as Associate Producer on several Discovery Channel documentaries. She received the Gold Plaque at the 1996 Chicago International Film Festival; has conceived and developed several television series proposals; and, written many spec tv scripts.

LARRY ZACHARKO
“Brilliant” “Talented” “World Class comic”. All of these and more have never been said of him. As a drama teacher he was known for his gardening. As a gardener, he is known for his lethargy. And as a playwright he is known as being the last one in the Playwright’s Guild alphabetical list. He’s been a member through the Playwright’s Co-op to the Playwright’s Union and now pays dues to the Guild. Playwright’s Co-op published his third play Maximilian Beetle in the Typewriter and Gesthetner Days and he has been writing mostly with and for youthful audiences for the better part of fourty years. He is naturally an Oilers fan and hides behind a camera mostly, but his plays are very funny even though they deal with serious incidents. Like most Canadian playwrights, he’s well known to about as many people as Jesus had apostles.