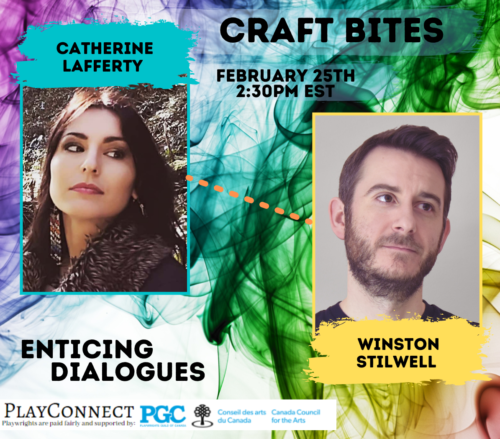 Thursday, February 25th
2:30pm EST
Join this enticing dialogue between playwrights Catherine Lafferty & Winston Stilwell as they share bite-size excerpts from their own work and engage in conversation about writing drama. Register for this FREE event HERE.

CATHERINE LAFFERTY
Katłįà (Catherine) Lafferty is a writer and aspiring lawyer specializing in intellectual property with a focus on literary copyright to mitigate ongoing colonial cultural appropriation and Indigenous victimization in storytelling narratives. Her memoir Northern Wildflower(Fernwood/Roseway Publishing) published in 2018 was the top selling book in the Northwest Territories upon release and is used as a teaching tool in both secondary and post-secondary Indigenous studies across Turtle Island. Her recently released fictional novel Land-Water-Sky/Ndè-Tı-Yat’a (Fernwood/Roseway Publishing) was added to the CBC’s Fall 2020 Reading List along with being placed on the Scotia Bank Giller Prize Craving Canlit list. For the past two years Katłįà has served as a Communications Advisor for the Treaty 8 Tribal Corporation assisting with community engagement of the Akaticho Treaty Agreement which has instilled in Katłįà a strong interest in Indigenous land title. Having served as the Director of Community Development and Indigenous Education for Dechinta Centre for Research and Learning, a world renowned land-based post-secondary program partnered with UBC and the University of Alberta, Katłįà is knowledgeable of the educational barriers facing Indigenous northerners in remote communities. Serving on numerous boards and councils throughout her career, Katłįà currently sits on the University of Victoria Faculty of Law’s Board of Appeal Journal. Her feature length film script North was selected by ReelWorld Emerging 20 (2020) whereby she was paired with Adam Garnet Jones, Lead of Indigenous Initiatives for Telefilm, as an industry mentor. Katłįà is a part-time reporter for Indiginews an online media outlet partnered with Discourse and APTN on Vancouver Island. She is a bi-weekly columnist for Northern News Services and her work has been published in the Toronto Star, National Geographic, CBC North, Briar Patch, the National Theatre of Canada, Red Ink, Council New Chapter and Grain Magazine. Katłįà Is currently working on her fourth novel Firekeeper while canvassing publication on her completed fictional manuscript This House Is Not A Home. Katłįà’s northern homeland and matrilineal lineage informs her storytelling and advocacy. Much of her work is dedicated to the pursuit of fighting for Indigenous rights while exposing northern issues in storytelling narratives through her legal background and growing writing platform. Katłįà is a member of the Yellowknives Dene First Nation from Somba K’e (Yellowknife), Northwest Territories to which she previously served as a Councilor for her community of N’dilo. Having grown up in Somba K’e, she currently splits her time between her northern homeland and the traditional territories of the Coast Salish peoples in Esquimalt, British Columbia where she is completing her Juris Doctor in Common Law and Indigenous Legal Orders with the University of Victoria.

WINSTON STILWELL
Winston Stilwell was born in Auckland, New Zealand and moved to Canada to follow his heart. His most recent play, Outward, was on stage as part of the Toronto Queer Theatre Festival. Winston was a finalist at the Newmarket National Ten Minute Play Festival with his play Parent/Child, which was also staged at the The Coming Out Play Festival in St. Louis, Missouri. He was the publicist for Bakersfield Mist at the Toronto Fringe Festival and stage managed and produced Point and Click at the Toronto Queer Theatre Festival. Winston now lives in Toronto with his dog.