“Connecting with Foreign Markets” with Colin Rivers and Kimberly Colburn 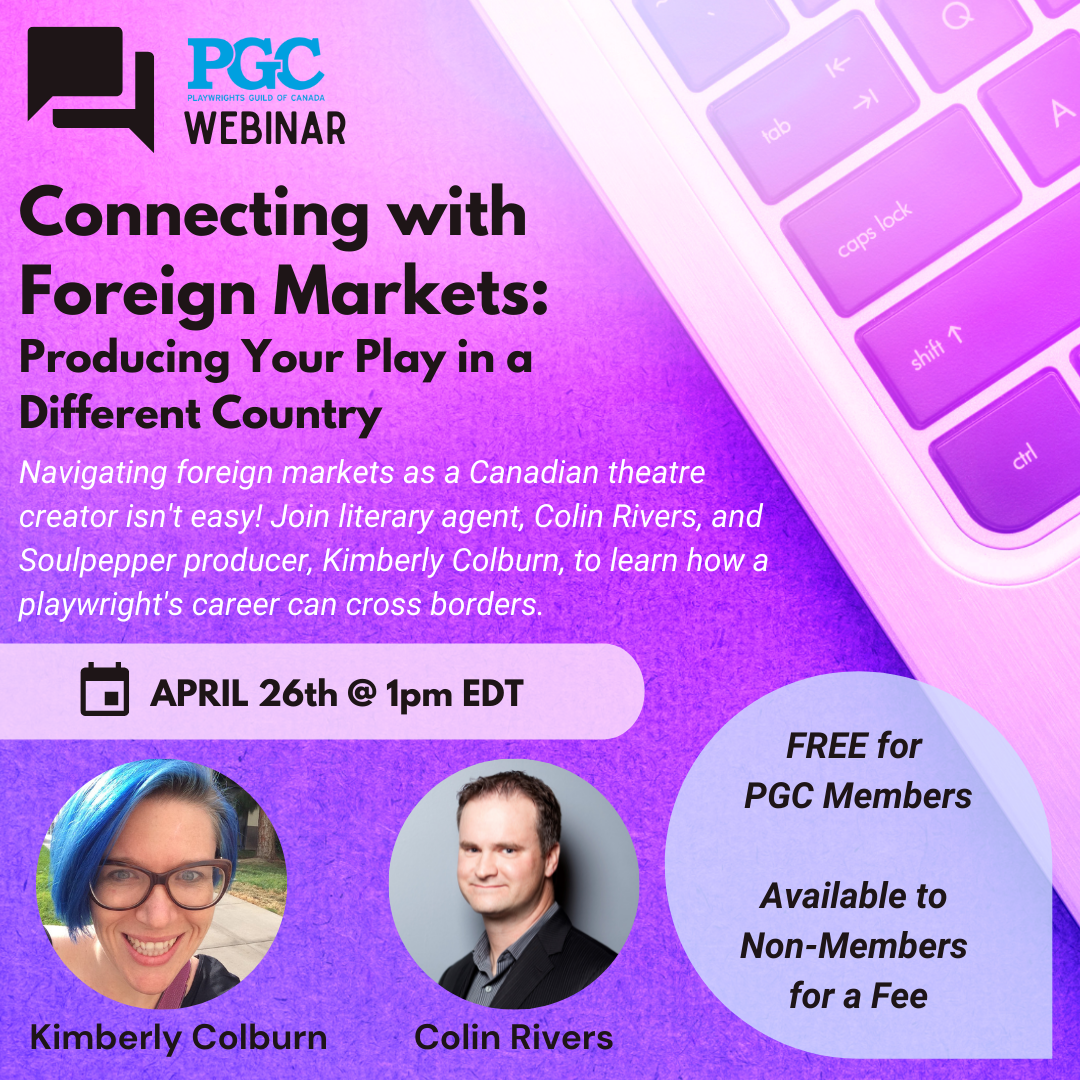 Navigating foreign markets as a Canadian theatre creator isn’t easy! Join literary agent, Colin Rivers, and Soulpepper producer, Kimberly Colburn, to learn how a playwright’s career can cross borders. Kimberly and Colin will share their experiences on how to build relationships with international networks, when to expand your reach to other countries, and how to navigate theatre practices that are different from the Canadian industry. Tune in for some success stories, great advice, and important tips that can help you in your search for international opportunities!

Kimberly Colburn (Dramaturg) is the Producer of New Work Development at Soulpepper Theatre in Toronto. She’s collaborating on many projects in development, including the musical Dixon Road by Fatuma Adar with Musical Stage Company, the musical Rose by Sarah Wilson and Mike Ross with Soulpepper Theatre, American Fast by Kareem Fahmy with Denver Center, and Hysterical by Jennifer Barclay with Arizona Theatre Company. Previous to her immigration to Canada, she was South Coast Rep’s (SCR) literary director, co-director of PPF and led the theatre’s CrossRoads initiative, a playwright residency program. Highlights of dramaturgical work at SCR includes the world premiere productions of Poor Yella Rednecks by Qui Nguyen, A Doll’s House Part 2 by Lucas Hnath and Little Black Shadows by Kemp Powers. Formerly, she was literary manager at Actors Theatre of Louisville, where she was dramaturg for the world premieres of Partners by Dorothy Fortenberry and The Roommate by Jen Silverman, among others. Other world premiere projects include Bekah Brunstetter’s Going to a Place, the site-specific José Cruz González’s The Long Road Today, Matthew Lopez’s Zoey’s Perfect Wedding, Zoe Kazan’s Trudy and Max in Love and A Wrinkle in Time adapted by John Glore, among dozens of other productions, workshops and readings. She has worked with companies including Denver Theatre Company, Los Angeles Opera, Mixed Blood Theatre, The Playwrights Center, the Eugene O’Neill Playwrights Conference, Oregon Contemporary Theatre, Critical Mass Ensemble, Artists at Play, Musical Stage Company (Toronto), Soulpepper and Native Voices at the Autry. www.theatrekimberly.com

Colin Rivers is co-owner of Marquis Entertainment and Marquis Literary, in partnership with Robert Richardson.

Marquis Literary is the agency division of Marquis Entertainment. It was launched by Colin Rivers in 2013. Marquis Literary is now the operational hub for the representation and promotion of playwrights/composers/lyricists within Canada and international markets, with a specialized focus on musical theatre and commercial development opportunities. Over the past 10 Marquis Literary has grown into one of the largest literary agencies in Canada with a core mandate to promote the voices of writers for the stage, and proudly celebrates a roster of 75+ first-class artists, including a Siminovitch Prize winner, multiple Governor General Award-winners and dozens of Dora, Jesse and Tom Hendry Award-Winners, and with thousands of productions having been produced, including with Mirvish Productions, on London’s West End and Off Broadway, as well as regional theatres coast to coast in Canada and the US, throughout Europe and with international companies from Japan to South Africa.

Foreign Markets Webinar: Producing Your Play in a Different Country