Ontario, October 26th, 2020 – The CASA Award is pleased to announce that the winner of the 2020 playwriting award is writer, theatre-maker and educator Genna Gardini of Cape Town, South Africa. The Jury, consisting of South Africans – educator and voice-body guide/sonic dramaturg Lieketso Mohoto, and writer/adaptor/director/ theatre-maker Janice L. Honeyman – and Canadian actor/playwright/librettist/ dramaturg Marcia Johnson worked with Canadian Chair and writer/educator/theatre-maker Sally Stubbs. They had this to say about the winner:

“We find Genna to be a writer with a strong and intelligent voice, the ability to create multi-faceted and intriguing characters and situations and to bring humour as well as poignancy to an intense and personal drama. Genna’s play, MANY SCARS, is a fantastical semi-autobiographical play about Multiple Sclerosis (MS), an autoimmune disorder of the central nervous system that disrupts the relationship between the body and the brain. This sophisticated and brave piece is well underway. It will be thrilling to see Genna complete it with the help of the CASA mentorship.”

Genna will receive financial support ($5000 CAD) giving her time to write. She will be partnered with two senior mentors: a Canadian dramaturge and a South African director; and will receive a small collection of Canadian plays, generously donated by Playwrights Canada Press and Scirocco Drama.

Now in its fourth year, CASA is thrilled once again with the excellence of this year’s applications.

The Jury noted: “Special recognition must be given to finalists Campbell-Jessica Meas, Nwabisa Plaatjie and Napo Masheane. Their work stood out the among submissions. We also wish to celebrate Daisy ‘Dmapz’ Maphathe and Sanelisiwe Yekani, whose applications received honourable mention. We note that South African womxn playwrights continue to bravely engage with challenging and personal subject matter.”

CASA is a CAnadian and South African partnership. In 2015, Beverley Cooper, Marcia Johnson, Sally Stubbs and Colleen Wagner were part of the Canadian delegation that attended the Women Playwrights International (WPI) Conference in Cape Town, and during this time formed a partnership with Amy Jephta, then President of WPI, in order to find funding opportunities for South African women. We invite all people of marginalized genders to apply.

CASA wishes to thank all the individuals and organizations who have donated funds, space or other support for of CASA, particularly Deborah Drakeford and ARC Theatre Company. Because of the kind and generous donation of two anonymous benefactors, CASA is fully funded through to 2022. 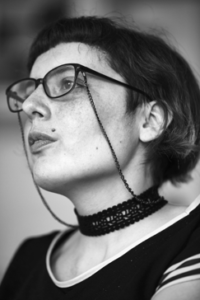 Genna Gardini is a writer, theatre-maker and educator. The South African playwright has an MA in Theatre-Making from the University of Cape Town and is currently a PhD candidate at Queen Mary University of London. In 2013, she was named one of the Top 200 Young South Africans by The Mail & Guardian. Genna co-founded the queer theatre company Horses’ Heads productions with Gary Hartley. Her plays WinterSweet (2012) and Scrape (2013) won Standard Bank Ovation awards. Genna’s poetry collection,

Matric Rage, received a commendation for the Ingrid Jonker Prize. She was a 2016 National Fellow at the Institute for Creative Arts, working on a project about Multiple Sclerosis and creative writing.

The CASA Project is a charitable arm of the Playwrights Guild of Canada, initiated by PGC’s Women’s Caucus. The goal of the project is to create meaningful connections between Canadian and African women playwrights. Follow us on Facebook: @thecasaproject

AWPN is a virtual community, connected via social media, of African women creative practitioners living in Africa or in various diasporas who are involved in creating oral and/or physical performance and playwriting (either as individuals or groups). It was set up to facilitate practitioners comparing and sharing their creative practices with one another, researchers and other interested parties, including potential audiences, directors, funders and artistic managers and programmers in all parts of the world. AWPN is also a platform for dialogue regarding what informs and impacts these women’s’ creative processes. It has been financially supported by the UK Arts and Humanities Research fund and University of Warwick. Media Contact AWPN: Dr Yvette Hutchison, Y.A.Hutchison@warwick.ac.uk